What we love Minecraft for is its inexhaustible field of customization. There’s hardly a thing (including its name) that can’t be revamped according to the player’s wishes. Another thing we love about Minecraft is its ability to take what you create and let you share it worldwide, so your mod (if it attracts enough fans) may be popular worldwide.

When a fan of anything with a fandom discovers Minecraft tools, of course, one wants to inject some of his idols into its veins. Sometimes these attempts create rich fan art pieces or just cute images we can use with no understanding of their background (if they have any).

So, here are awesome skins for Minecraft you can dress your character in. Some are quite versatile, while others are distinctly male or female. But who cares as long as you unleash your creativity? This world is not about what your exterior looks like, but about who you are inside.

To install a skin, you need to enter Profile section in your Minecraft application and import the file you download into the corresponding section. The .png file may look like an ordinary image of small size, with very strange content, but Minecraft interprets it as a 2D layout for a 3D object, and it becomes your avatar. That’s the way it works.

Most of the skins we present here are 64*64 pixels and have no HD version. But, anyway, if you preferred smooth textures and HD graphics, you would play something else. And these, with all the limited graphical capacity, are stylized the best way possible.

We must warn you that all of these skins have only been tested on Windows version of the game and may fail at using with other platforms. Being unofficial, they have no guarantee of work even on Windows. But so far (as we have checked them) they all do. 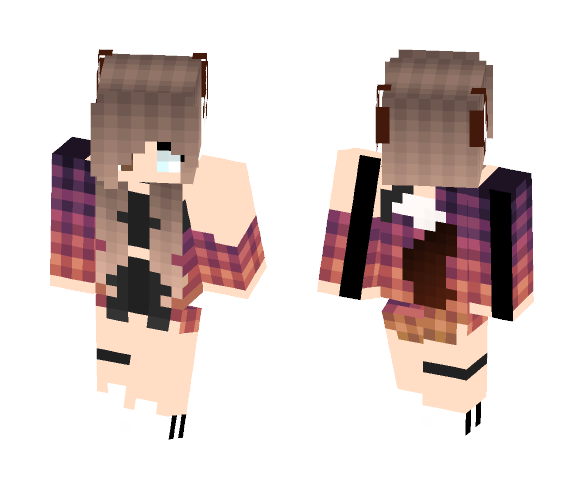 If your favorite Game of Thrones character is Arya Stark, if you have sharp teeth behind a sweet smile, then you may want to represent yourself with a wolf-like girl. The image may seem blurred when static, but as your character moves, its lycanthropy shows in each move.

From the back, it looks more impressive, with real wolf’s color and predator’s ears on the top of her head. This skin will certainly be demanded among girls, and not only. 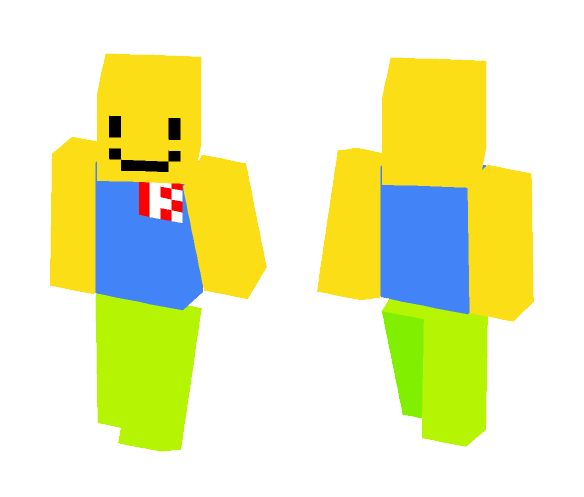 Yellow and green, this parrot-like skin seems too attractive in Minecraft world and is noticeable from afar. In Battle Royale mode Minecraft couldn’t help following, this one is probably the most useless. But in a collaborative game being colorful is being distinguished, and it’s good to tell yourself from the others when you’re looking from third person perspective.

So whether this skin is practical or useless, depends on the mode you prefer. In building it may be helpful to distinguish yourself from the objects you operate with more easily. And some might just like its color scheme. 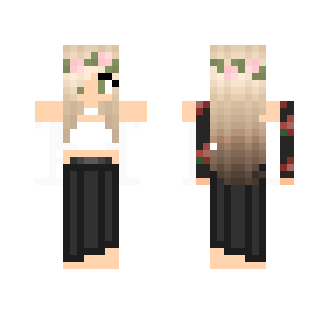 Despite low resolution, this girl is really cute. How did the designer show even roundness of her head from the back? That’s the art of making expressive pictures in such a limited space and volume. When speaking of her dress, this is really a dress, quite long, with sleeves, and showing all the cuteness to express.

The one with such a skin is sure to gain tons of sympathy from male players. And even if there’s a crook man behind this cuteness – who cares? 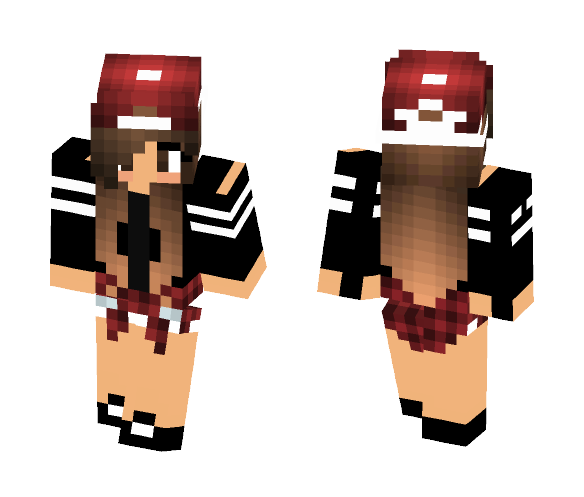 Brown-haired, with something like a red cap upon her head, with quite a nice look – maybe you recognize her? Or is it you? Well, who requires portrait similarity, when it’s quite versatile for brown-haired girls? If you are one, pay some attention to this skin – maybe it’s been made just for you.

The developer was bored when making this skin; at least, that’s the motive. But the girl is quite nice, and anyone will assume there’s the same kind of cutie behind this skin. 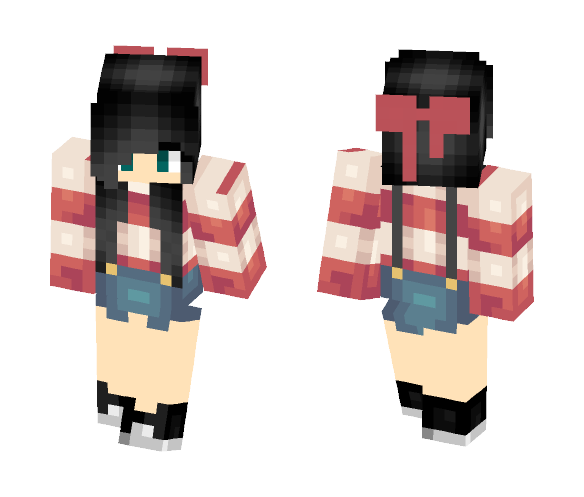 Another cutie on our list, and she doesn’t look like anyone before. Being recognized as a female, she looks quite unique, with her red striped top and black hair. It’s a good generic skin for those who look like that in real life, or, at least, want to.

There’s only one thing that spoils the impression. When looking at her face, it looks like her eyes are red and bleeding. Or are these glasses? Anyway, if you want to show your disapproval of someone’s work, that would fit perfectly. 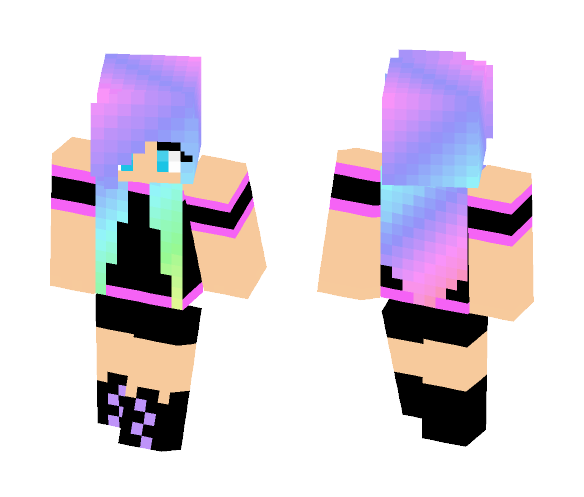 Bright and colorful, this girl is really unicorn-styled, the way unicorns are displayed in anime and cartoons. Her rainbow fluorescent hair upon daring dress style, with the same defying bright on her shoes, makes her the perfect choice for girls, going for a bold look. Or for those dreaming to be that type.

And yes, this avatar tells a lot about her reckless and adventurous nature. Miracles happen, and life is fun! 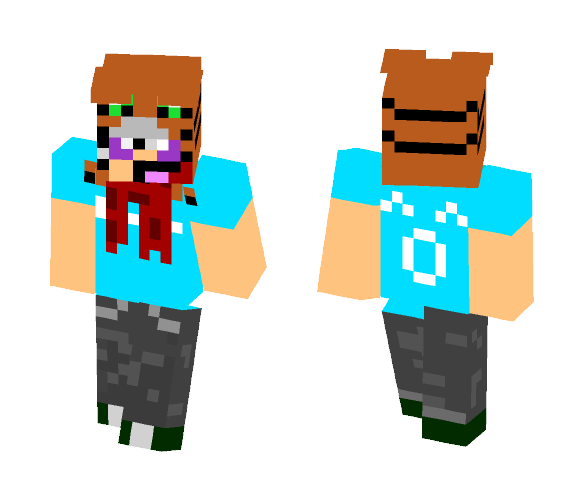 Kreek is something of a crooked freak; at least, so you might think after seeing this skin. It’s a male one, for those who love life bright and doesn’t want to hide jolly nature behind gloomy dark clothes. This represents a crafty guy who enjoys what he does, cherishes his beard and looks the way he likes,

Wear this to build futuristic skyscrapers of fairytale castles. Light and easy, this one has no long sleeves, so nothing stands between you and your dream. 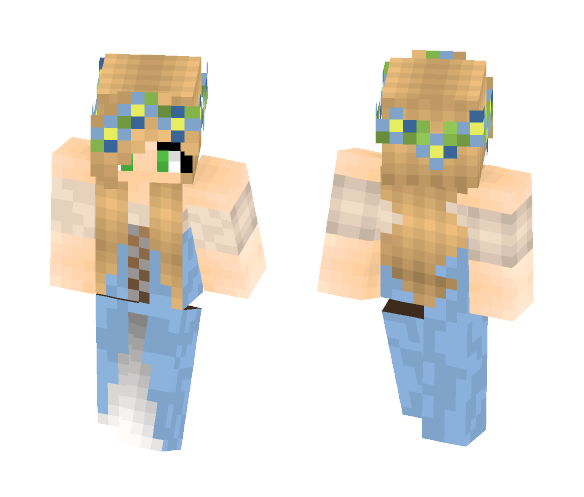 There’s nothing too medieval about this girl. Some country girls dress like this even now, and city ones follow that fashion. But if the author says she’s medieval, let’s believe.

Flowers in her hair, blue dress with a drawstring and no sleeves – that’s quite a summertime style, isn’t it? Great for a long walk or hard work, and for having fun in the sun as well. Simple natural joys: that’s what this skin is all about. 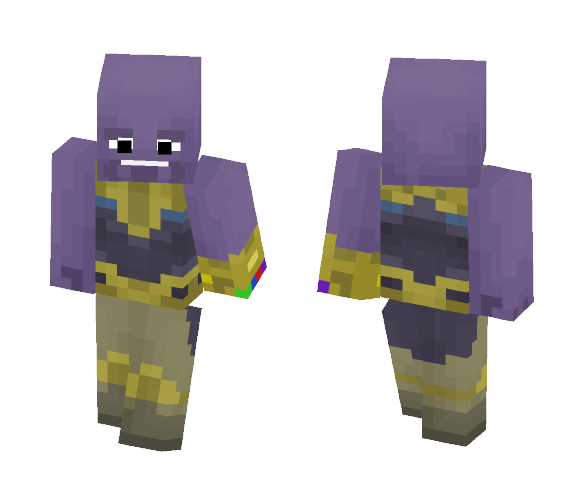 The author succeeded in recreating Thanos style, as he appears in Infinity War. Dangerous and mystical will you look, with your mind set to wipe out half of you all. If you’re recreating any scene from Marvel installments, this skin will be a perfect one. We can’t remember Thanos building anything in the latest movies, but that doesn’t mean he never had.

The designer created this skin upon an official toy statue and the footage leaked before the premiere; but now, as the movie has hit the screens, we can see that it’s really like the prototype. 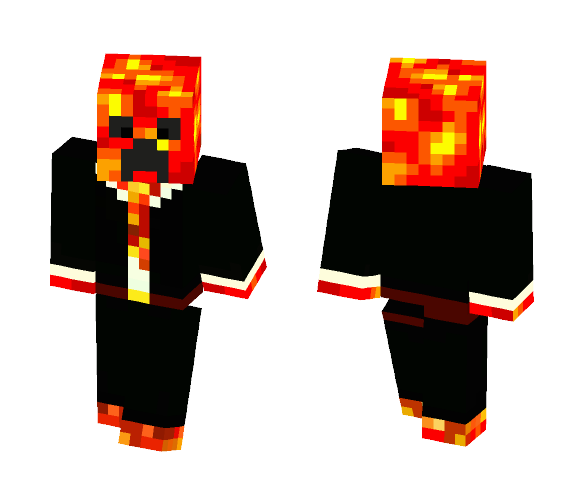 Being a Preston Playz the Lava Monster has its pros. For example, you are on Urban Dictionary, they write fanfiction on you, and one day someone makes a skin for Minecraft and names it after you. And it’s really similar, with its hot burning lava style. Unless it’s Halloween, when the unaware ones may confuse it for a pumpkin. But the style, in general, is quite recognizable: orange face in a black suit, contrast as it is. 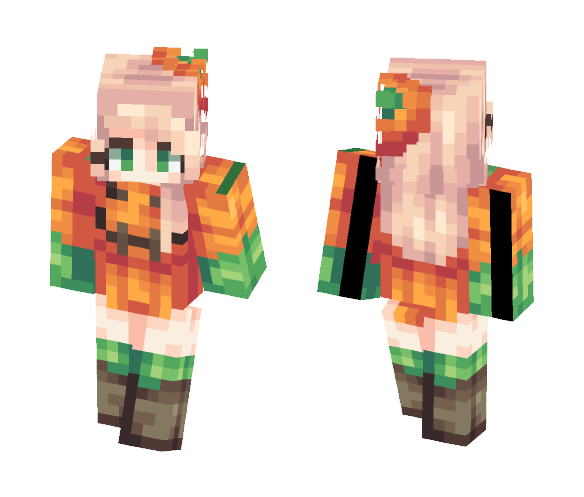 Maybe this year it’s too late to dress such a skin (unless Pumpkin is your nickname or family name, or you are a Smashing Pumpkins fan), but the next Halloween is surely to come one day. And then everybody would wear something like this, so don’t get lost on a pumpkin field!

Apart from Halloween esthetics, this one is quite moderate in colors and can act as a good mask in a colorful environment. On dull background, on the contrary, it will distinguish you both from others and from the ground. 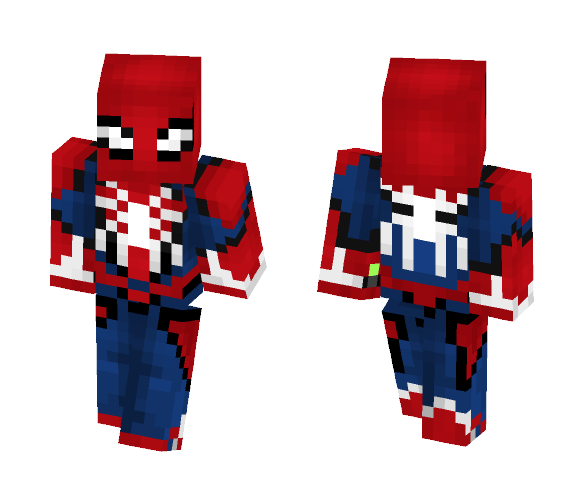 Though it’s hard to find a game further from Minecraft than Marvel’s Spider-Man for Sony PlayStation 4, the skin is still here. Of course, it brings none of the acrobatic abilities Spider-Man has, and it doesn’t even let you generate web from your hands. But it makes you look like Peter Parker in his superhero suit, and that’s all you want from it, then the skin does its job quite well. Red, white and blue, like the original, it can be recognized without explanation, despite the shape of Minecraft avatars has nothing in common with the prototype. 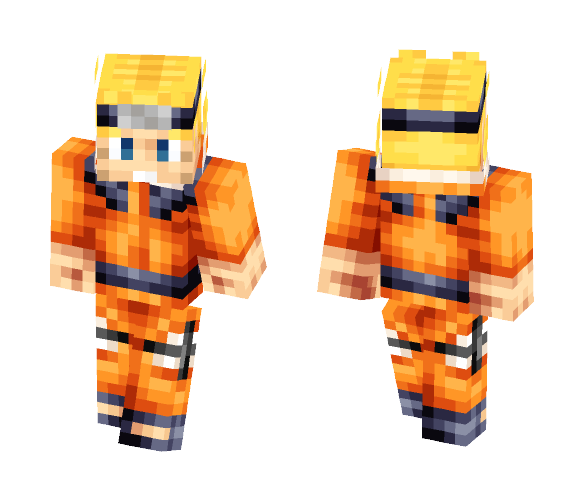 For those crazy about anime, Naruto is one of the most iconic symbols of the genre itself. This Naruto skin will make you glad and help you represent yourself as a fan as well. This 64-pixel image represents all that characterizes Naruto: the suit, the skin, the haircut, all that recognizable feature set. Maybe we abuse the word “recognizable”, but with this kind of art, it is too definitive to neglect it. And this word is the best positive characteristic of Naruto skin. No wonder it has become a hit among Minecraft and anime fans. 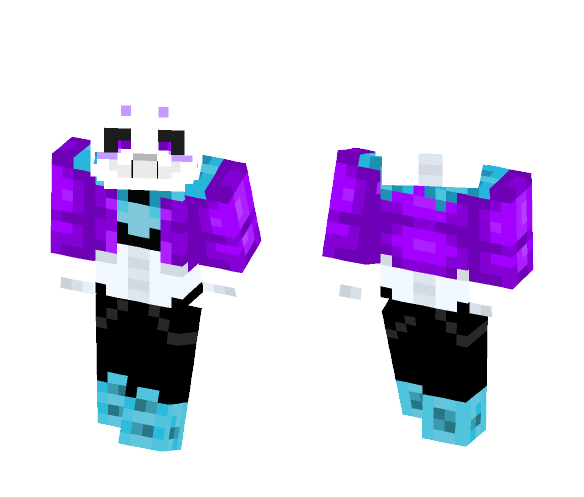 If you’re a fan of Undertale, and then you have found that some adult content, violence, nudity and horror will make this world better, then this skin has been made just for you. Sans is the character that represents all the spices above, and his visual style is so bright that even this schematic (as Minecraft itself) skin tells everybody around what you’re into. Underlust universe is an alternative for its origin, but any universe is legal in Minecraft if you build it. 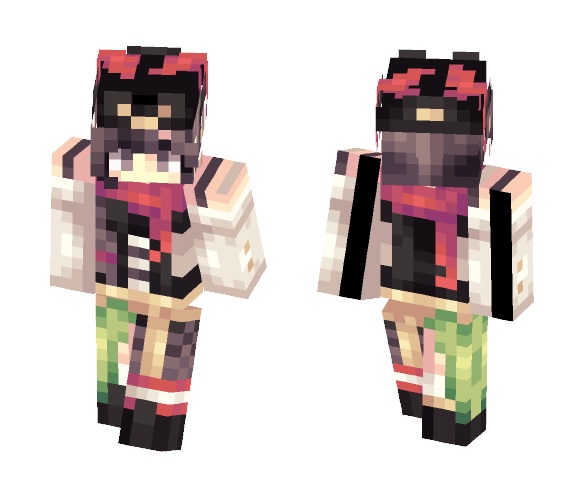 This bright female skin reminds us of anime and manga style again, and for a reason. Seven Seas is the publisher that brings manga and anime to America and offers its own stories as well as localized Japanese ones. Not that it recreates some specific character. It rather brings the mood of what Seven Seas projects are about.

And it’s unique, it’s got its own style, enough to be distinct in the crowd. That’s the reason to install it by itself.

Of course, you can find more awesome skins for Minecraft, or even craft them yourself. Which of these is your favorite? Or maybe you’d take several and change them with time? We’d be glad to hear your feedback and learn about more amazing skins to try on in Minecraft.