"This is my most prized possession..." that's what Deadpool would say if he had a Minecraft skin recreated after him. And if he was a devoted Minecraft player of course.

Nevertheless, if you're a fan of both blocky adventures and the sarcastic, unkillable chatterbox, who just refuses to go silent for a minute without making another biting commentary - our Top 5 Deadpool Skins for Minecraft is a perfect guide for you. 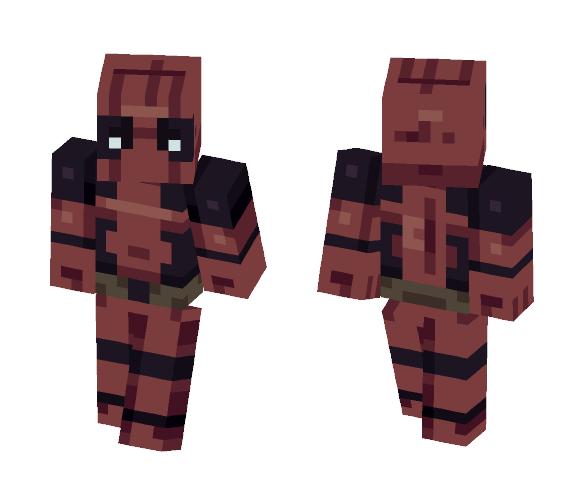 This skin will let you add the iconic Deadpool's costume to your Minecraft wardrobe. Due to its darker color tones, it can be used for expressing your determined and maybe a little grim, dark mood. Everyone around will have to notice: the situation is about to get pretty damn dangerous. The texture of the skin is a bit muddy though.

The mask of the skin is decently recognizable, so odds are you won't be mistaken for Spiderman or one of his numerous doppelgangers.

A very juicy and bright skin will make you stand out no doubt. Your look will be instantly noticeable, for it mimics the Deadpool's famous outfit pretty well, with a discernible white belt buckle in the middle. Only this Deadpool is in a mood for fun. And occasionally bringing some pain.

It's perfect for thematic playings, such as organizing a Marvel altogether superhero flash-mob, celebrating Halloween, a new Deadpool movie premier and so forth.

The texture quality is pretty smooth and clear, even if we're talking about something designed to complement Minecraft's pixelated aesthetics. 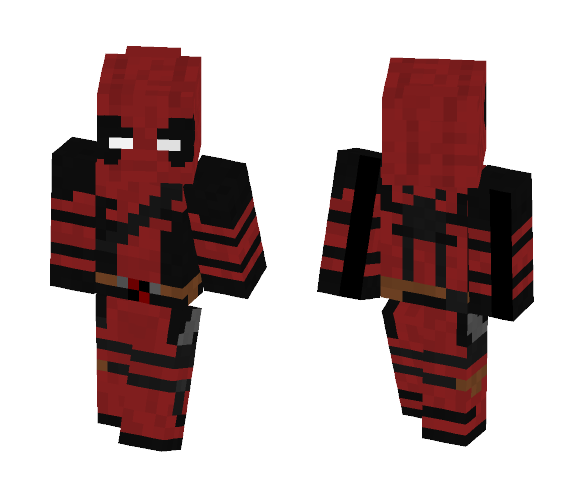 We all know what happens when Deadpool sobers up and kicks his flamboyant, comedic and slightly childish personality aside for a moment. Some ruthless and inevitable ass-whooping happens. Indeed so!

The pattern of tiny black squares on this costume displays Deadpool's readiness for some hardcore action. You can't help but see how Wade Wilson is full of ambition and energy to implement some colossal and particularly hazardous project.

Maybe a five-meter tall cuboid T-Rex statue made of dynamite with a quote on it: "All the dinosaurs feared the mighty T-Rex" would be a suitable goal to shoot for? 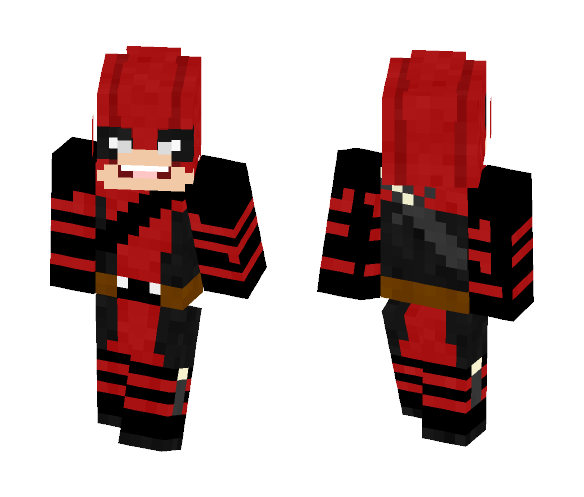 This is a mask-up skin that features Deadpool's notorious smirk. Both disarming and disturbing, it encourages you to make a couple of "hilarious" (mostly for you) shenanigans:

Then and only then the other players will understand how deep is the meaning of that devilish sneer. Just make sure you have a secure place to hide from a lynching mob after you're done with your innocent escapades. 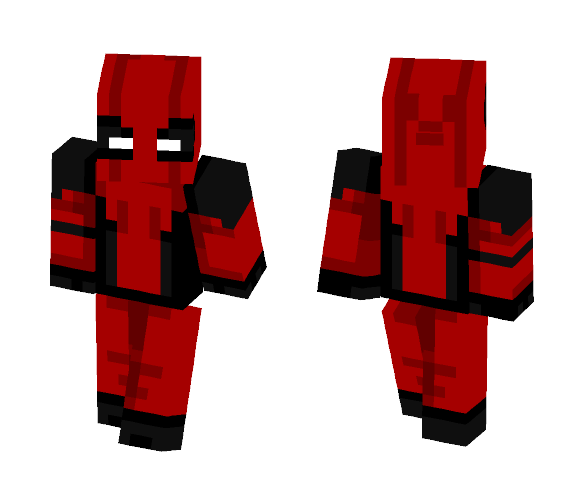 And finally the last skin. This is the discernible, simple and humble Deadpool's costume. It has the "chillax" message in it. As if Deadpool was on a vacation or just idly spending his time away.

It is easily recognizable because it recreates the eccentric superhero's uniform pretty correctly. Unfortunately, the skin doesn't feature Deadpool's favorite tools of destruction - such as a baseball bat - or an uncanonical Adventure Time wristwatch.

Other than that it's a satisfactorily tailored costume, recommended to every Deadpool fan. Strictly for everyday use.